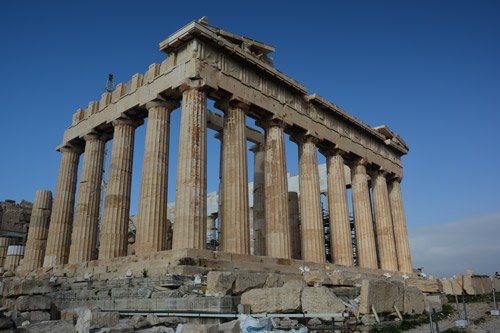 Welcome to the Piraeus cruise port guide. Piraeus is the port to Athens. It always has and it always will be. Piraeus is about 12 km of 7 miles away from Athens. Piraeus is the 3rd largest city in Greece and one of the largest ports in the Mediterranean. Although Piraeus has some nice sights and museum to offer we could highly recommend you to take the 30 minute journey over to Athens. Athens has been inhabited since Neolithic times. It is a city that shaped our modern day world in many different ways. The cities fascinating history would reach a peak in the 5th century B.C. when values of civilisations would be established that we still live by today. Politics, philosophy and democracy has all been created and developed here in this capital city of beautiful Greece which has therefore received the nickname: cradle of western civilisation. The modern town of Athens has been build around the ruins that have stood the test of time for thousands of years. They stand witness to the mighty Greek empire. The ruins and art will reveal the many stories that can be told about this ancient city. 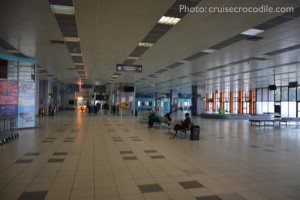 This is the terminal A building. You will find lots of facilities here like ATM’s, tourist information, souvenirs shops, currency exchange and taxis. 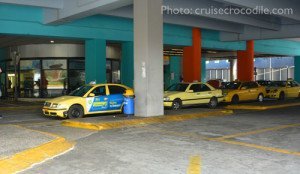 The taxis will line up outside the terminal building. Taxi prices are listed, however still agree upon a price before you step in. 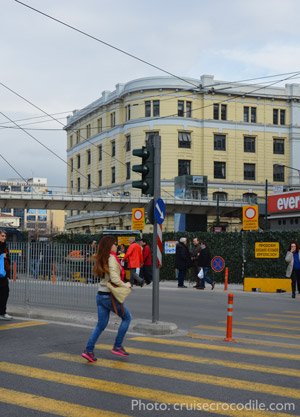 The light yellow building is the Metro station in Piraeus. From here you can catch the metro straight into the city centre of Athens.

There are about 12 different docking locations in the port of Piraeus.. Most cruise ships dock at cruise terminal A or B. See map above for its exact location. At the cruise terminal you will usually find shops, currency exchange and a tourist information booth although it is not always open. There are often maps that can pick up in the cruise terminal. Depending on where you dock exactly your dock is about 1 mile ( < 2 km) from the centre of Piraeus and 7 mile / 12 km from the city centre of Athens. Your ship might provide a shuttle service. Check this with the front desk on board of your ship. There are also plenty of transportation options to find on shore side. Find your options underneath:

Taxi from Piraeus to Athens The official taxis in Piraeus are yellow and they have a meter. A taxi from the port of Piraeus to Athens should cost you no more than 15 or 20 euro one way. Especially if you share a taxi it will save you a lot of hustle, bustle and time to get into Athens. Do take into account the taxi will take at least 30 minutes to get into the centre. A great place to be dropped off would be at the Plaka (the historical neighbourhood right in between all the mayor sights). Please make sure the driver puts on the meter or might end up with a much higher price. Please find an estimation of the taxi prices underneath:

To airport: 45 euro one way

Metro from Piraeus to Athens One of the ways to get into the city centre of Athens is by metro. Keep in mind that the metro station might be up to 30 to 40 minute walk. Alternatives are to either take a taxi or public bus 40 from the cruise terminal to the metro station. At the metro station you can take line 1 (green line) into Athens. Buy your tickets at the counter or at the machine. The metro goes straight into the historical district of Athens. A convenient stop to get off is at Monastiraki. See the location of the metro stop Piraeus and Monastiraki marked on the map above.

Sightseeing train For those not interested in going into Athens, you might be interested in taking the Piraeus sightseeing train. This is a quick tour through Piraeus on one of those trolley trains. First departure is at 8 am and they should depart every 30 minutes. Find the train at the exit of the terminal of close to it.

Wi-fi The terminals in Piraeus have free wi-fi and besides that you will find a lot of cafe’s and restaurants that provide wi-fi when you purchase a cup of coffee. 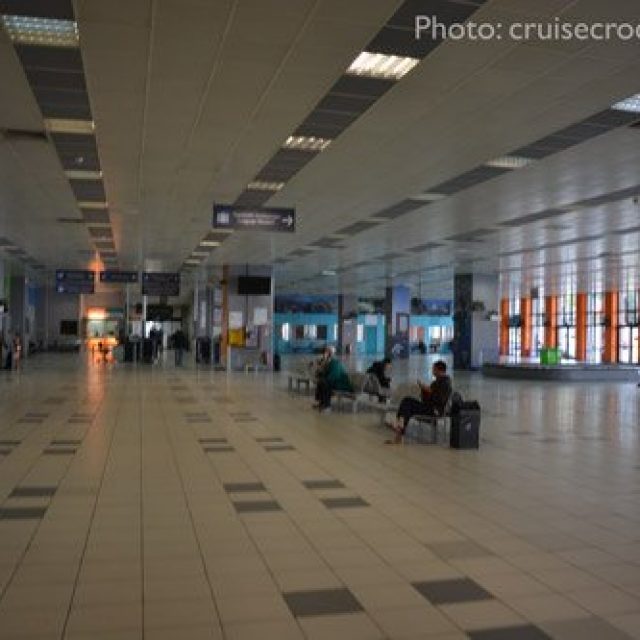 The port of Piraeus offers several docking locations for cruise ships. This is cruise terminal A which is one of the most commonly used cruise docks. You will find tourist information, souvenir shops and a taxi stand at the cruise terminal. Learn more about ways to get to Athens from the cruise terminal in the full Piraeus cruise port guide. 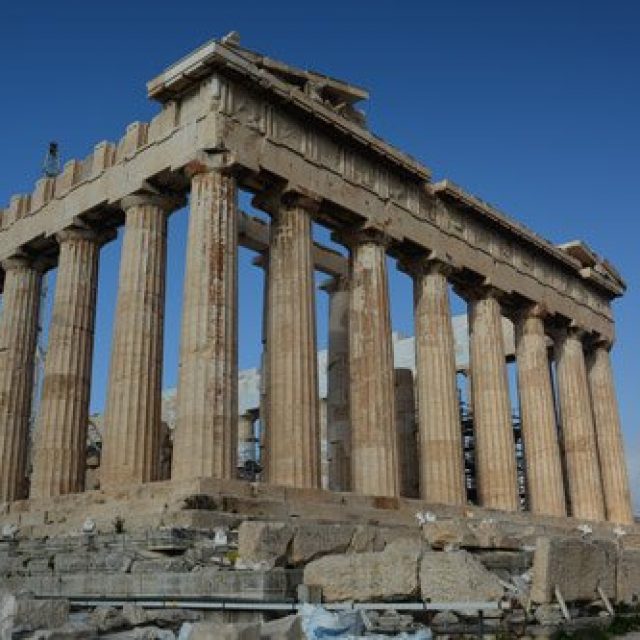 The acropolis is the eye catcher of Athens and one of the most famous buildings in the world. The Acropolis was born around 440 BC. It was the highlight of Greece, a centre of creativity in an era when writing, theater and art would flourish. 25 centuries is still stands proudly on the hill overlooking the modern day city of Athens. Combo ticket deal! If you buy a ticket for the Acropolis you basically buy a combo ticket that is valid for 4 days for 7 sites (one visit per site). This ticket of 12 euro is valid for the Acropolis, Theater of Dionysos, Archeological site and museum of ancient Agora, Roman Agora, Temple of Olympia, Keramikos and Adrian’s Library. 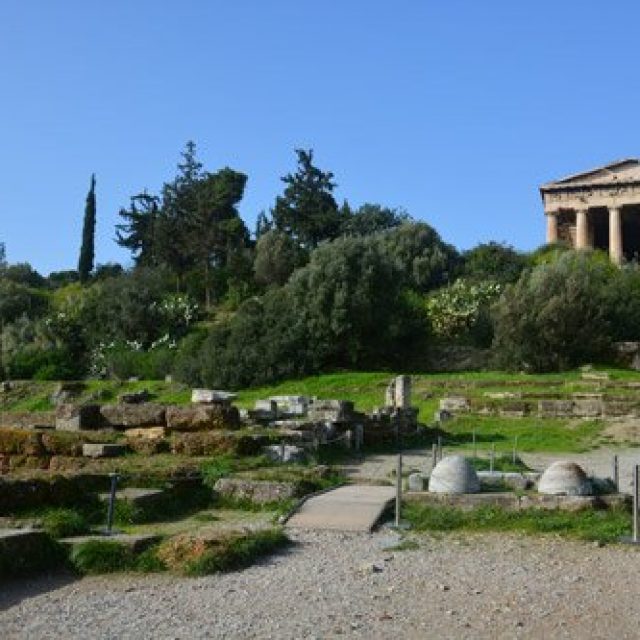 The Agora might be the most important place in Athens if not Europe. It formed the political heart of old Athens from 600 BC onwards. Imagine this was place where you could find theaters, schools and shopping centres. A place that was the political and social heart of Athens and this is still being seen as the birthplace of democracy and the western world. Find this museum in the heart of Athens. Stoa – Agora Museum On the premises of the Agora you will find the Stoa. It was build in the 2nd century BC and nowadays it houses the Agora Museum. It is a very good museum especially if you want to know more about the form of art 2 millennia ago and learn about the meaning behind the rocks that make up the ruins of Agora nowadays. Find the Stoa on the premises of the Agora. 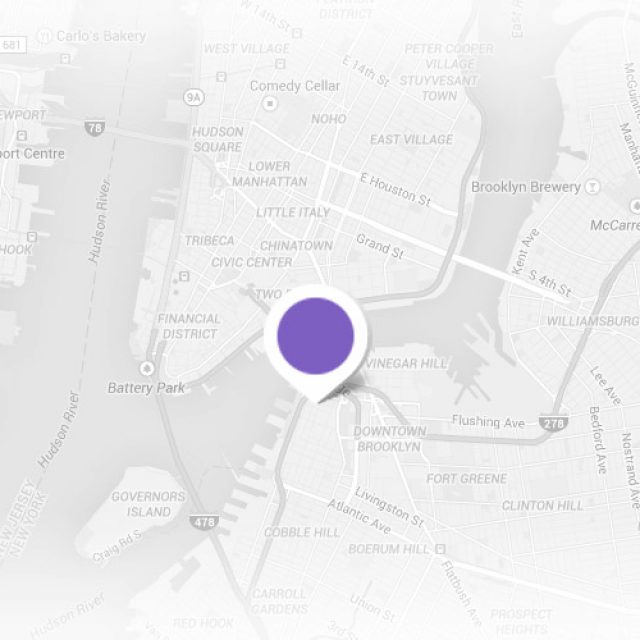 The plaka is the neighbourhood that developed around the ruins of the Acropolis. This 17th century neighbourhood is a maze of streets that lead you to one of the most scenic streets of Athens. Pick up your souvenirs here or try some Greek specialities.

This is without doubt the best museum of Greece. The exhibition displays art and archeological findings of thousands of years of Greek history here in 1 building. It is immense and it sometimes feels like they have an unlimited amount of sculptures here.

The new Acropolis Museum opened its doors in 2009. To get the full picture of what the Acropolis was all about you simply have to visit this museum. It houses lots of artefacts and archeological finds from the site and it completes the story of these mysterious times. 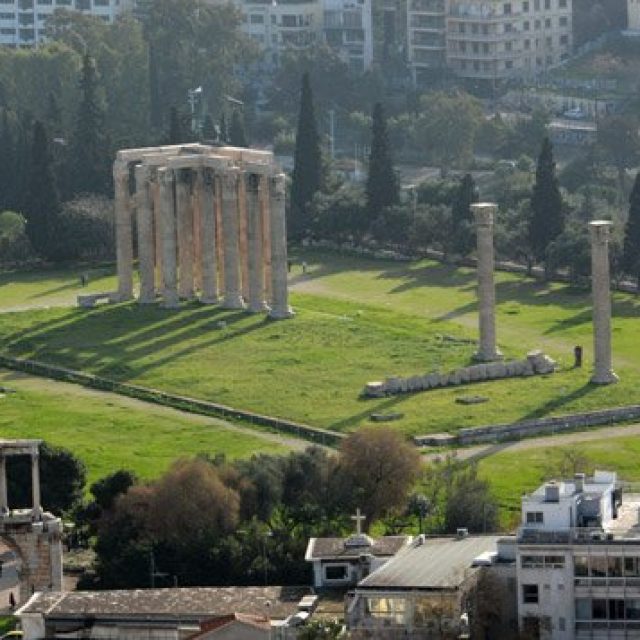 You will find many sites like this throughout the city centre of Athens. This one is the temple of Olympian Zeus. It was completed by emperor Hadrian in the 2nd century BC. It took 8 centuries to build and that point it was the largest temple in Greece.