Sailing out of Vancouver will give you a unique opportunity to see Vancouver from a new perspective and this is especially a great photo opportunity. The best pictures can be taken on the port side (left hand side) of the vessel as you sail out of Vancouver. See the map and information underneath and find out your sailing route and what to see along the way in the first 20 minutes after departure.

B. Iron workers memorial bridge
The bridge was named after the collapse in 1994 where 19 workers would lose their lives. Many famous artist wrote about this disaster in their songs like Stomping’ Tom Conners with “The bridge came tumbling down”, Jimmy Dean with “Steel man”.

D. Stanley Park
What Central Park is to New York is what Stanley Park is to Vancouver. It is a 1000 acre public park full of attractions and sights. It is known around the globe as one of the best city parks in the world. Citizens often use the 8,8 km / 5,5 mile long Seawall to work out. You will get a good view of the sea wall when you sail under the Lions Gate bridge.

Skyline Vancouver. The further your ship gets from the dock to more beautiful the skyline of the ship gets. Enjoy these views on the port side (left hand side) of the vessel.

E: Sulfur industry
Canada is the world’s largest exporter of sulfur. While sailling out of Vancouver you will see large piles of chemical element sulphur that will soon be exported all over het world. Millions of tonnes of sulphur are transported through the port of Vancouver every year. Most of the sulphur is being produced as a by-product of the natural gas industry.

F: Lions gate bridge
This suspension bridge crosses the narrows of Burrard Inlet connecting the Downtown Vancouver with North Vancouver. It is named after the “The Lions” mountain tops north of Vancouver. It only has a ship’s clearance of 200 ft / 61 meter, therefore for most ships its a close call.

When you go underneath the Lions gate bridge you will sail into English Bay. There is often cargo ships that drop anchor here to wait until they get to load cargoes at the port of Vancouver.

From here your ships go in different directions depending on your next port of call. Sit back and enjoy the views. 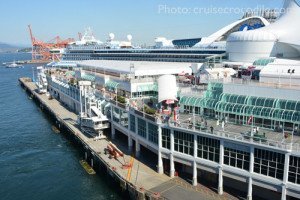 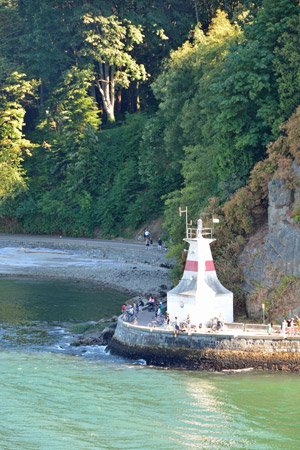 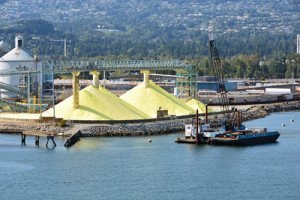 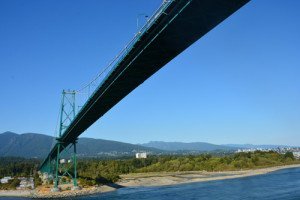