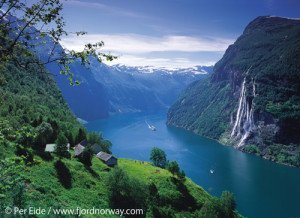 Sailing through the Geirangerfjord is a unique experience that you shouldn’t miss. Cruise Crocodile has the ultimate scenic cruising guide for you so you can navigate yourself through this fjord and actually know what you are looking at.

The Geirangerfjord. This fjord is without doubt one of the most scenic fjords in the world due to its sheer rock face, narrow passage and dramatic waterfalls. The Geiranger fjord is about 15 km or 9,3 miles long and it is branch of the Storfjord. All the way at the end is where you find the tiny village of Geiranger. The fjord is one of Norway’s most visited and it is the only one, jointly with a more southern fjord, that is listed as a UNESCO world heritage site.

Best time to be out on deck. It takes about 4 hours for your ship to get from open sea to the Geirangerfjord. The map underneath shows the entire route from sea to Geiranger. 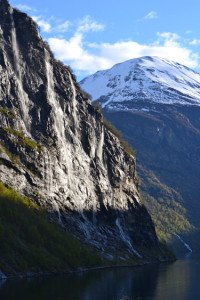 You will notice that the fjord is getting more scenic the closer you get to Geiranger. Therefore we recommend you be on the outside deck to catch the most scenic part an hour before arrival and the first hour after departure. 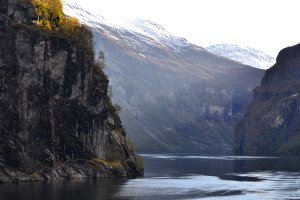 A. Geiranger. This is the tiny town of Geiranger and your port of call for the day. It is a tiny village where only a few hundred people live during the whole year. Geiranger refers to an old Norwegian word: Speer. This is because the fjord is speer shaped all the way at the end.

B. Eagles bend. There are 2 roads going in and out of Geiranger. One of these roads is the famous Eagle’s bend which you will see on the starboard side. This is a steep stretch of road with 11 hair pin bends that opened up in 1955 to keep Geiranger accessible all year round. Navigating the road is an experience in itself. Especially from the water you can spot the 11 hairpins and see how steep it actually is.

C. Knivsflå farm. Population is very thin in the fjord as the terrain is simply to steep to build on. There are however a couple of farms that you can spot in the fjord. Spotting them can be quite a challenge, especially in this case. To spot the Knivsfla farm you will need to locate the 7 sister waterfall. About half way up the mountainside, directly to the right hand side you can spot a tiny building. This is the Knivsfla farm. It is not connected to the rest of the world by road. The only way to reach it is by boat and a 45 minute hike up the mountain. Most of the farms in the fjord have been abandoned as life in such remote areas is very hard and nowadays many Norwegians would choose a life in the city or village over a life in the fjords.

D. Seven sisters waterfall. This is the eye-catcher of the Geirangerfjord. The Seven Sisters waterfall has gotten its name from the 7 columns of water that fall into the fjord. The tallest of the sisters has a free fall that measures 250 meters or 820 ft. In the early season seven sisters will be present, later in the season (depending on the rainfall) less sisters/columns will be there.

E. Friar or Suitor waterfall. Opposite the Seven Sisters waterfall you will see the Friar or Suitor waterfall. It is not very high, but it is known for its shape. As the water tumbles down the mountainside it shows bare rock at the waterline resembling the shape of a bottle. Rumour has it the suitor was always trying to impress the Seven Sisters on the opposite side of the fjord. Forever turned down by all the sisters he became so depressed he took the bottle instead.

F. Skageflå farm. There is another farm to spot also half way up the mountainside. This farm was made famous by the King Harald and Queen Sonja of Norway. In 1993 they invited 30 members of the royal family for a lunch at the farm to celebrate their Silver Wedding Anniversary. You can only reach the farm through a steep 1 hour hike. Queen Sonja led the hike, but King Harald decided not to follow her lead, he took the helicopter up instead.

G. Bridal Veil. This is the third waterfall you will find in the Geirangerfjord. The Bridal Veil has gotten its name because of the way it falls over the mountainside into the fjord. When backlit by the sun (often in the late afternoon) it looks like a bridal veil.

General information: The definition of a fjord is a U-shaped valley, carved out by a glacier now filled by seawater. In this case a glacier was being pulled down from the mountains by its own weight and gravity and it carved out a U-shaped valley of approximately 600 meters / 2000 feet deep. Glacier ice is much stronger than regular ice because the oxygen has been squeezed out of it by its own weight. Because of the weight, pressure and gravity it will be pulled down to the lowest point dragging any kind of rock along. This has a sandpaper effect on the landscape and will eventually creates the U-shaped valley that you are sailing through with your ship.

You’ll notice that the ship is not really that concerned about the depth of the water. This is because there is a rule of thumb when it comes to these fjords: The water is just as deep as the mountains are high. It is impressive to learn about power of nature in such a way.

The fjords have extremely fertile waters and it is full of life. The marine life we can find here are often atlantic tuna, octopus, lobster, blue shark, basking shark, pollack, porbeagle, spiny dogfish, small dolphins and much more. There are even some fjords where you can find coral reefs at great depths.
In the fjords there are also lots of fish farms that you can spot in the water. These are the large round baskets in the water. They mainly hold salmon and rainbow trout. Fish farms make up an important part of the Norwegian economy and one of the main sources of income for the locals.