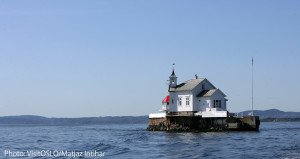 To reach the port of Oslo your ship will need to sail through the Oslofjord. Cruise Crocodile has the ultimate scenic cruising guide for you so you can navigate yourself through this fjord and actually know what you are looking at.

The Oslofjord. This fjord is a 107 kilometer or 66 mile long body of water in the south of Norway. Many people picture a fjord as long and narrow waterway with steep mountain sides. Norway has many of these fjords, but you will only find them in the west of the country. The Oslofjord does not match this description, because it is not a geological fjord. It is however called a fjord because in old Norwegian the term “fjord” can refer to a wide range of waterways as it also does in this case as well. None the less, it a scenic sailing route that will lead to the capital of Norway.

Best time to be out. It takes a couple of hours for your ship to leave open sea and to sail all the way up to Oslo. The best time to be out would be the last hour before arrival or the first hour after departure. Check the map underneath to see the entire sailing route from open sea to Oslo.

A: Akershus. The castle on the hill welcomes all seafarers to Oslo. It is called the Akershus. It is a medieval castle build to protect Oslo in any way it can. It functioned as defence bastion, prison, royal mausoleum and much more.

B: Aker Brygge. Its former shipyards have been recently transformed into the new promenade or waterfront left to the city hall. Find lots of restaurants and cafe’s here and all the way at the end you will find the new contemporary art museum of Oslo. With already 12 million visitors a year in its first year this is the newest place to be in Oslo.

C: Bygdoy. The peninsula you will see on your (starboard side) right hand side is Bygdoy. You will find Bygdoy has parks, forests, beaches and museum. In facts Oslo’s most prominent museums are located in this fancy neighbourhood like the Kontiki museum and Fram Museum you will spot at the waterfront.

D: Dyna Lighthouse. The ship will closely pass a tiny lighthouse that is situated on its own island. This is the famous Dyna Lighthouse. It was build in 1875 and it got automated in 1956. It is surrounded by a stone wall making it look like it’s a small boat sailing the Oslofjord. It is not just a lighthouse nowadays. Today it is also an exclusive restaurant.

E: Drobak. Your ship will go through a very narrow and scenic passage at Drobak. You could imagine that the Oslofjord has been an important part of the history of Oslo. It would be no surprise to know there are couple of shipwrecks at the bottom of the fjord. There is also a rather famous ship in history that sunk here in Drobak: the German heavy cruiser the Blucher. The ship was send to invade Oslo in April 1940. It was here at Drobak that the cannons and torpedoes struck the ship and caused it to capsize and sink. The ship is still at the bottom of the fjord at a depth of 64 meter, 210 ft. For several times there was talk of removing the wreck, but no plans have been carried out due to a mayor problem. The ship is leaking oil. In 1991 she was leaking even as much as 50 liter, 13 us gallons per day. 1000s of tons of oil have been removed ever since, but even up to today she is still leaking. 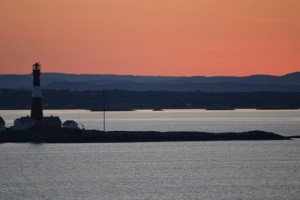 General information. The entire population around the Oslofjord, including Oslo, is about 1,8 million. That is about a third of the entire country and that makes it the most populated area of Norway. The Oslofjord is the most important shipping lane for cargo and passenger ships, but it also serves as a recreation area for the locals.
You will see many islands in the Oslofjord. A lot of Norwegians have a summer house or cottage aside from their main home. What would be a better location for this second house than your own private island. These islands can be quite pricy and although most of them only have room for a house and garden the price could range anywhere from 1 to 16 million dollars.
Archeologist can prove that the Oslofjord has been inhabited for thousands of years. One of the most remarkable findings are the vikings ships that are currently in the Viking Ship Museum. They were found in these waters in the late 19th, beginning 20th century.
Edward Much is one of Norway’s most famous painters. He owned a studio situated along the Oslofjord in Asgardstrand. The Oslofjord appears in several of his paintings, including the world-famous painting “The Scream”.